To mark its third year of partnership with Renault Sport Formula One™ Team, Bell & Ross presents three high-performance chronographs. The three Bell & Ross R.S.18 watches are three mechanical chronographs: the king of functions in the world of motor racing. It measures short intervals of time, embodying the notion of speed.

The cases have been engineered from perforated micro blasted titanium, lending them an understated —and decidedly modern— matt look. This material is well known for its lightness and rigidity. Made as lightweight as possible to enhance performance, the parts of a Formula 1® chassis are technical prowess. The chronographs are activated with rocker pushers on the three R.S.18 models evoking the paddles on a Formula 1® steering wheel. These rockers, already present on BR-X1 models, have now been adapted for the BR-03.

Also featuring an anti-reflective sapphire crystal, these three chronographs are hard wearing and ensure optimum legibility in all situations, behind the wheel or around town. Acting as the watch’s bodywork, the three dials also contain nods to motor racing. The touches of colour for all the chronograph functions (Renault’s signature yellow) show clear allegiance to the distinctive and highly stylized aesthetic of the world of motor sports, racetracks and paddocks. 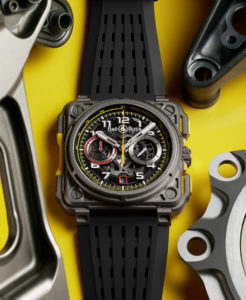 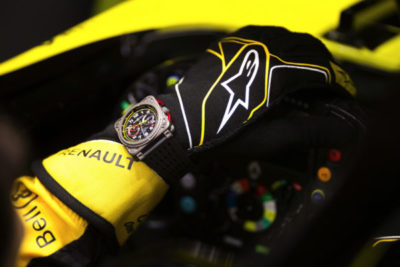 Lastly, a strap has been developed for this series of three R.S.18 chronographs. Made from black perforated rubber, this strap offers unrivalled comfort on the wrist thanks to its unique ergonomics and its high level of breathability.

In the Formula 1® and watchmaking universes, the goal of the engineers and designers can be summarized in one key phrase: to constantly push mechanical engineering to its limits. Connected by the values of high precision and excellence, the partnership between Bell & Ross and Renault Sport Formula One™ Team is a continuous source of inspiration and motivation for both. The new R.S.18 series embodies this pursuit of performance, integrating the very best from the top motor sports discipline: technology, mechanical expertise and materials. These exceptional timepieces take the quest for excellence and precision to its zenith.

To Infinity And Beyond With Model Rania Pugholm