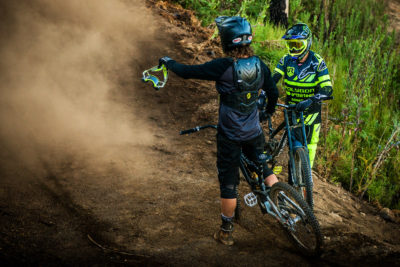 The DarkFEST course is nearly complete! The guys have been working amazingly well with the diggers and with a few tiny sprinkles of rain and some spade work, have managed to compact most of the line.

At the beginning of the week Nico & Clemens compacted and cleaned the jumps as much as they could with the diggers. Then the rakes came out to clean everything between the jumps and get it ready for the rain that was forecast. As usual the clouds came, made everything look nice and stormy, sprinkled a few drops and moved further East before unloading tonnes of rain. So with not much water to soak in the guys got to work with the spades before it all dried again.

There was more rain forecast for the end of the week, so the guys got everything ready for it and enjoyed the trails on the farm and the big line at Hellsend Dirt Compound with Needles and Brendog and a few locals.

The rain came and went way too quickly again, but it was enough to get everything good enough to test it. The top of the line is more loamy dirt, but it held together well on all the berms and shark fins. The road gap is quite intimidating with the landing hidden until you’re on it, but the guys made friends with it quickly. The first jump was a little shorter for testing and the guys managed to get speed just by dropping in from the road. Everything was perfect and Sam & Nico got a few jumps in before dark and cleared the long and low before the hip too. Next morning Clemens joined in for a quick test and it was drier, harder and faster, so the guys were having to speed check a bit more, but everything was good and the lip could move back to where they wanted it.

That wraps up week 3 and we’re looking forward to lots more riding!!!