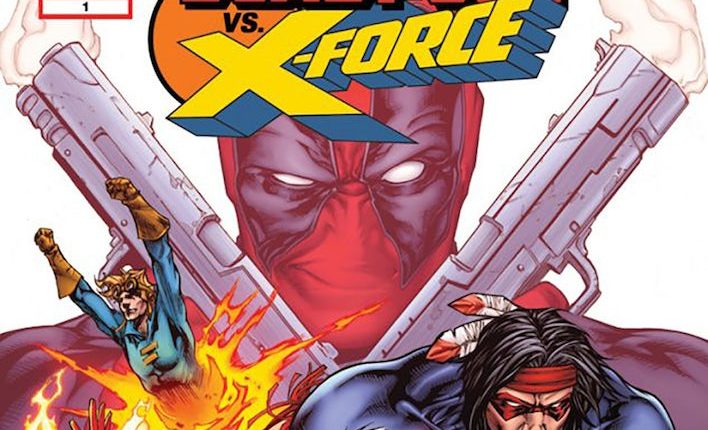 When Deadpool was released in February of 2016, it took a lot of the audience by surprise, particularly considering how botched Reynolds’ first appearance as a different form of the character was in 2009’s X-Men Origins: Wolverine. From the first frames of the film, it was obvious that this was going to be different than any other superhero film — or hero — out there.

Deadpool 2 has been in production for a while now, and details are slowly being revealed, the most recent of which is that the first photo of Zazie Beetz as Neena Thurman/Domino has been released. Part of the X-Men in the comics, Domino — besides being an amazing fighter and an ace sharp-shooter — is a mercenary who has the mutant ability of manipulating luck.

She also happens to be the sometimes girlfriend of the film’s villain, Cabel (Josh Brolin). The actress portraying her is German-born and her most prominent role to date as been in the TV series Atlanta. Ryan Reynolds tweeted the following image, commenting, “Some people just know how to work a red carpet.” Speaking of Cable, the latest Deadpool 2 trailer shows him going up against Deadpool, confirming the crux of the story, take a look below.

It’s clear that even in situations of high-pressure, Deadpool is going to continue to be the same biting, sarcastic, anti-hero we have all come to know and love. Question is, with Cable being such a powerful force, does Deadpool have what it takes to protect “the kid”? Additionally, not to throw any shade, but we’re thinking the “X-force” doesn’t hold a candle to The Avengers, or do they? We guess we’re just going to have to wait and find out.

What follows is our guide to everything we know about the upcoming film so far, which is set to release on May 18, 2018.

So Just Who The Hell Is Cable?

His real name is Nathan Summers,and he’s the son of X-Men Cyclops and a clone of Jean Grey, who was transported into the future for safety reasons, and ended up trained as a warrior. From there he has come back to the present to make his mark (usually involving a lot of blood). He has powers of telepathy and telekinesis, which can be used to read minds over a great distance or channel that power into powerful bolts of psychic energy. Pretty much a badass.

Next to Ryan Reynolds as Deadpool, the first installment’s biggest laughs no doubt came from the overly earnest Colossus, member of the X-Men and Negasonic’s mentor. The character has the ability to turn his entire body into organic steel, but we never see him in his human form at any point during Deadpool. While Stefan Kapicic provided the Russian accented voice, the physical appearance of Colossus was created through a combination of CG and motion capture performance.

After Deadpool became a box office juggernaut, there was every expectation that Tim Miller would return to direct the follow-up. But by October of last year, he was gone as a result of the oh-so-cliched “creative differences.” Word is that Miller wanted to do a “stylized sequel,” while Ryan Reynolds preferred to stick with the raunch comedy tone that had played so important a role in making the first film a hit. Replacing him is David Leitch, an uncredited co-director on the original John Wick (2014) and represented this summer by the Charlize Theron-starrer, Atomic Blonde.

Talk about a minor character who connected with the audience. He was simply giving Deadpool a ride to a crime scene, but he was so funny in his brief moments and his rapport with Reynolds was wonderful. A lot has happened for the actor since he hung out with Wade Wilson, including last year’s Chee And T, The Sweet Life, Mono, Ghostbusters and Office Christmas Party. He’s already got roles in six films scheduled for this year.

Previously, the German-born actress appeared in six episodes of the TV series Atlanta, the TV miniseries Magot Vs. Lily and in the feature films Double Bind (2015), and Wolves and Finding Her (both 2016). One would think that this high profile a gig would really bring her to people’s attention. Her character of Domino (aka Neena Thurman) is a superb marksman and a master of hand-to-hand combat skills. She also has what Wikipedia calls “mutant probability-altering powers” (translation: she can alter the chances of things happening or not happening). Domino is also the lover of Cable.

A secret weapon of the first film was the use of supporting characters, three of whom will be returning. Brianna Hildebrand is Negasonic Teenage Warhead, an X-Men trainee, who can launch atomic bursts from her body. When you see Guardians Of The Galaxy, Vol. 2 this summer, fans of Negasonic can offer thanks to Marvel producer Kevin Feige, who struck a deal that she could be a part of Deadpool if writer/director James Gunn could use the character of Ego The Living Planet in that film.

The fact that Cable is the bad guy is not a great revelation, because anyone who stuck around to the very end of the credits of the original Deadpool, saw that parody of Ferris Bueller’s Day Off’s final seconds, where Deadpool, wearing a bathrobe, tells us who the villain of the sequel will be. What is surprising is that they actually carried through with that. And, recently, the announcement was made that the character would be played by Josh Brolin (also starring as Thanos, the big bad of the third Avengers film, Infinity War, coming in 2018).

Rhett Reese and Paul Wernick are returning to write the screenplay, which is great news when you consider what a unique tone the first film had. The two had previously worked together on Zombieland (2009) and G.I. Joe: Retaliation (2013). There may have been some hints of how twisted these guys could be in the past, but nothing that would have indicated the insanity of Deadpool. In February of this year it was reported that additional script work was being done by Drew Goddard (The Martian, Netflix’ The Defenders) and Ryan Reynolds.

Frankly, we don’t know. The one thing that we do know about the fiscal world of Deadpool is that the first film cost $58 million to produce and it pulled in a global gross of $783 million. That means it made a profit of… let’s see, 58 goes into 783… oh, wait, then there are all those damn zeroes. It made a lot, and the intent is to bring this one in on a relatively low budget as well. When you consider that the average cost of making one of these films is about $250 million, it’s understandable why it’s better to keep the cost down so there’s more profit for everyone.

Deadpool captures the Thanksgiving holiday spirit as only he can in the first of two teaser posters for the new film.

Is nothing sacred to the Merc With A Mouth? Of course not! Now he’s spoofing Good Housekeeping magazine. Take a look at some of those other article titles on the cover.

Now that’s confidence! At one point, Ryan Reynolds hoped the third film would be a team-up between he and Hugh Jackman’s Wolverine, but then Jackman had to go all classy and end things with Logan. That aside, according to producer Simon Kinburg a script is already in the works, and one that could possibly be focusing on the interaction between Wade and another mutant group, X-Force, which is supposed to be getting a film of its own focused on a more militant group of mutants.